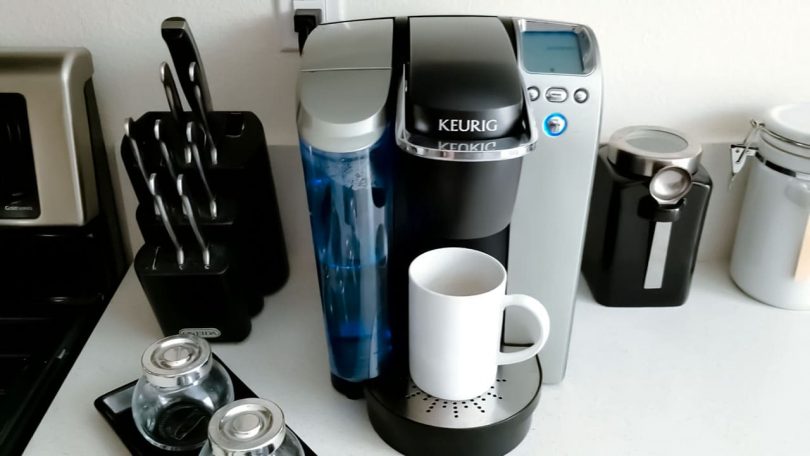 I want to go use my Keurig machine this morning and noticed ya weren’t making any coffee. I can’t have that so what it was doing was making the typical noise and all that good jazz and uh but nothing was coming out.

I’m not full of Skookum this was clear so according to a couple of videos on YouTube, they recommended fiddling with this little digit up here looks sharper and uh you want to mess with. But I didn’t think that was the problem because I could see pretty well then I wasn’t clogged but I went ahead and I used my handy dental pick and I very gently went up into the holes and I didn’t lose any Skookum.

I was uh blocked up in there to be very careful when you do this because there are little tiny rings and other bits of nitrile high-temp go the good keeps, uh everything sealed. So that did not work.

So my next thought was that it wasn’t drawing any water so I went into the water tank and removed this contraption that hadn’t been cleared. I haven’t changed a filter since about it so that might be the problem. So I removed it all together and it still would not draw water so I kind of moved the tank I noticed at the suction or feed the water feed area.

I tried that sucker out and then I went and put in and put my mouth on it. It was making the noise and blew. And what happened was he’d bypassed it and didn’t take when I was blowing into the machine it bypassed off this little something. Here I’ve kind of shot out there so it kind of guy kind of got my face wet. I thought to myself well I know a little bit about how fluid dynamics work and how pumps working in that wreck are just an overflow. It’s a relief.

I would say so what I did was I put the water tank back on so it had some back pressure here so I wouldn’t back feed through here. And then what I did was I started a new cycle sucker down and got it heated up waiting for your blue lights once that was ready to roll.

I did this without a cup in it, just was going to test with this water, went ahead locked and loaded and put the cup on and then while it was trying to drop.

I started covering this vent noticing that immediately as soon as I would cover it we piss out the second I would let go. Well, and air would come out see you just like that so by blocking this vent hole.

I’m forcing the pump to push all of its pressure out through the k-cup dispenser and whatever closed blocks are lodged up in there that did it because now it actually brew the stronger faster cup than it has in months.

That being said if your care for your character changes hums away like a pissed-off robot and won’t give you any coffee in return. Maybe you got a cup two nuts no really just try to try go ahead and make sure everything’s clean and then let it run and hold on.

Squeeze this little sucker here and force it to blow out whatever kind of snot is all gummed up in there and that’s that enjoy your newfangled Chinese-made piece-of-shit coffee maker you.