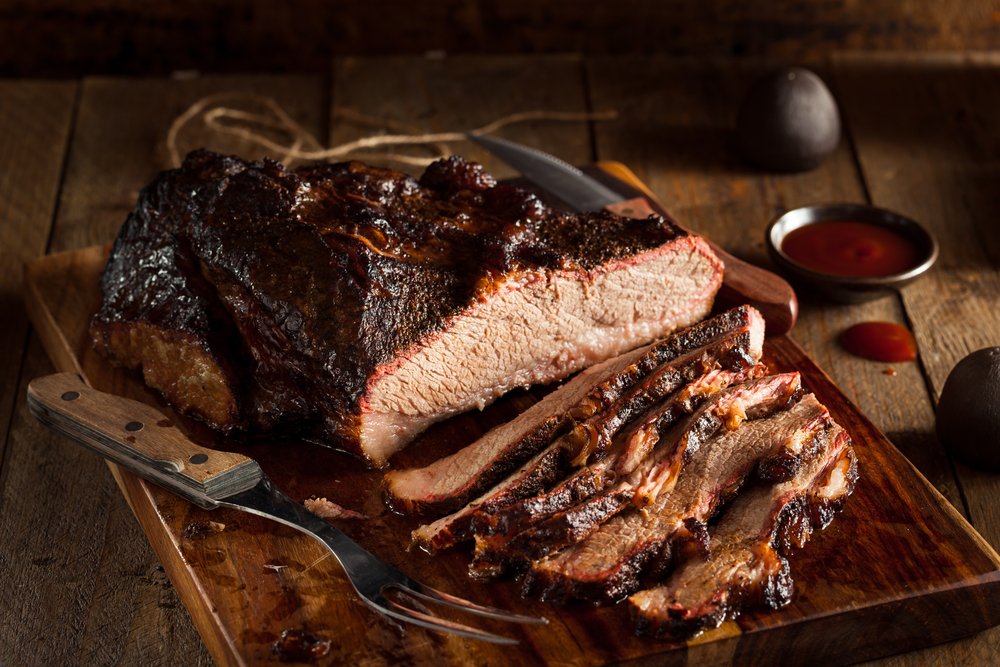 Plenty of questions arise when cooking this meat type about how long to make, how to do that for the softest and most delicious final result.

As a rule, in most recipes one may see the scheme of cooking a meat piece with a view to 1 or hour and a half for one pound of brisket piece. You may keep to this rule, but there are many shades of grilling the meat piece and you should know about them.

One important factor that while cooking the smoked piece with this time scheme, you should heat your oven up to 250 Fahrenheit before putting the meat in. Also, it’s useful to let your brisket lie at a room temp for around an hour before letting it into the grill oven.

How Long Does It Take to Smoke a 12 Pound Brisket?

It would take about 12 hours or even more, depending on the style you use for smoking, if it’s slow and low style, the duration is right, but when, for example, it’s fast and hot, the time will be very different.

How Long Does It Take to Smoke a 16 Pound Brisket?

As you see, it might take about 16 hours or more when cooking with slow and low smoking. You are able to cut the big piece of brisket into two or three parts and in this case the cooking will be faster. If you are planning to do the wrapping of the brisket, it may also push on the time of bruising.

How Long Does It Take to Smoke a 5 Pound Brisket?

It might take from 5 to 7 hours, still, with the fast and hot style you will make the process much faster or wrapping the meat piece in a foil will make the cooking shorter, of course.

How Long Do You Smoke a 9lb Brisket?

Deciding to make some meat which weighs around 9 lb, you might expect to have it finished after 9 hours of the process of smoking in a grill oven at an approximate temp of 225 degrees Fahrenheit. Actually, this piece of meat is not big and it’s very likely to be quite thin.  You don’t need to overcook it and smoke it for longer than nine or ten hours.

Do You Smoke a Brisket Fat Side Up or Down?

It’s okay to smoke the meat with the fat side lying up if the heating temp comes from the grill top, as fat prevents overcooking it from this side and the meat is tender with acquiring thick crust on the low side. But the rubbing usually goes off when cooking like this.

When cooking the brisket with the fat down, you get better crust, especially when the heating temp comes from the bottom of the grill. The meat side would not get stuck to some grill grate in this case. But if the grill oven is with the heat from the top, you have a chance of getting the dry meat.

In fact, most cooks prefer smoking the brisket fat side lying down, but you should take into account all these details and decide for yourself.

Here is video for you to watch and make a proper decision:

How Long Does It Take to Smoke a 2 Pound Brisket?

It might take you about 2-3, or even 4 hours of smoking, but be careful to avoid having the brisket overcooked and too dried. Usually, such a small piece of this meat isn’t that fat to cook it for a long time and the oven temp should vary from 225 to 250 degrees Fahrenheit, not higher.

Do You Have to Wrap a Brisket in Foil When Smoking?

Thus, there are 3 main characteristics that are important when deciding about the duration of cooking:

So the common rule of 1 hour for a pound means you will cook with the Texas style ‘slow and low’. If you are going to wrap the brisket in a butcher paper, you usually do that around after 5 hours of smoking and then you have it wrapped for the other 5 or 7 hours while cooking.

It describes the cooking of the average weight brisket piece. Wrapping helps to prevent penetrating too much smoke into the meat and also contributes to preserving meat’s moisture. In addition, wrapping the brisket makes the smoking faster in time.

When you cook the brisket in a foil, not in a butcher paper, you have to cook it with a view to 45 minutes for a pound of brisket. So, smoke the meat for around 6 hours first, this will let the meat soak enough smoke and acquire the wonderful crust and then wrap it into the aluminum foil with two layers and do the tight wrapping.

If you like, you might add some broth or any other suitable liquid for bringing enough moisture to the smoked meat. It may be about one cup of liquid or even more, the flavor of the meat will get better in this case and it will contribute to the braising process. In case the wrapping is loose, it will take more time to get the brisket done.

If you are firm about smoking your meat with the ‘fast and hot’ style, you need to cook it with the 30 minutes for a pound rule to avoid overcooking and drying the tasty dish. With the following conditions the temperature of the grill oven should be around 300 degrees Fahrenheit. Many cooks don’t recommend smoking a brisket like this, but you may try to do carefully and succeed in getting the best meat smoked.